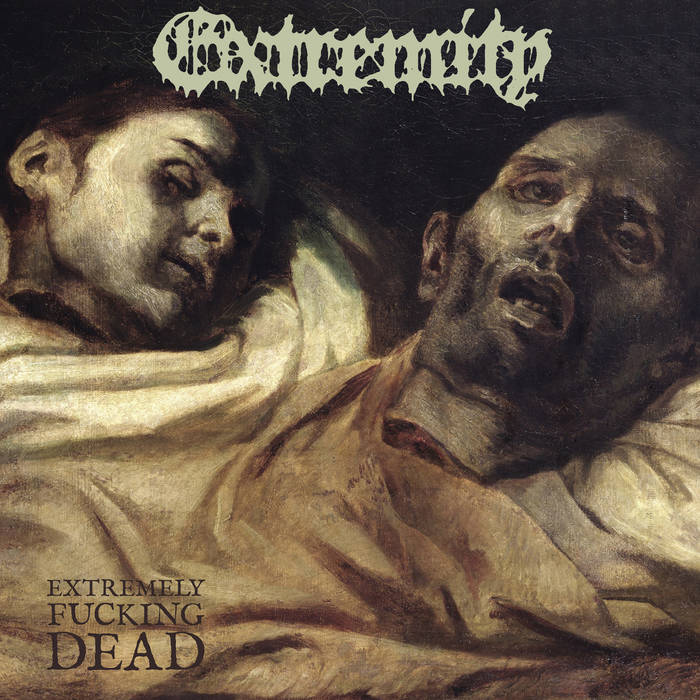 harveyhardcore Like drinking from an arterial blood spurting firehose this down and dirty slab by SF's Extremity fucking gets it man. Sometimes reminds me of Austria's Pungent Stench in both humor and heaviness. Favorite track: Crepuscular Crescendo.

Zach This is everything I love about Death Metal, if you love Death Metal for the same reasons I do, you need Extremity in your life

sennin It really doesn't get more straight up fucking death metal than this. Dirty riffs with substantial crunch and heft and a three word title that sums up all the self-referential humor and brutality of death metal in one go. 'Extremely Fucking Dead' is a beast of a record. Favorite track: Chalice Of Pus.
more...

Gestating in the twisted bowels of the Bay Area for six years, only now, in 2017, has Extremity dislodged itself from the musty climes of obscurity to contaminate the American Death Metal cesspool. Like a jaundiced plume drifting up from a fetid swamp, on ‘Extremely Fucking Dead’ the four-piece infect Death Metal with odiously oozing intentions.

From the grisly Gore Metal of ‘Crepuscular Crescendo’ to the Bolt Thrower ravaged plunder permeating ‘Bestial Destiny’, Extremity present a simultaneously studied and loosely devastating specter of Death Metal cited from the genre’s many epicenters in America, Scandinavia, the UK and beyond.